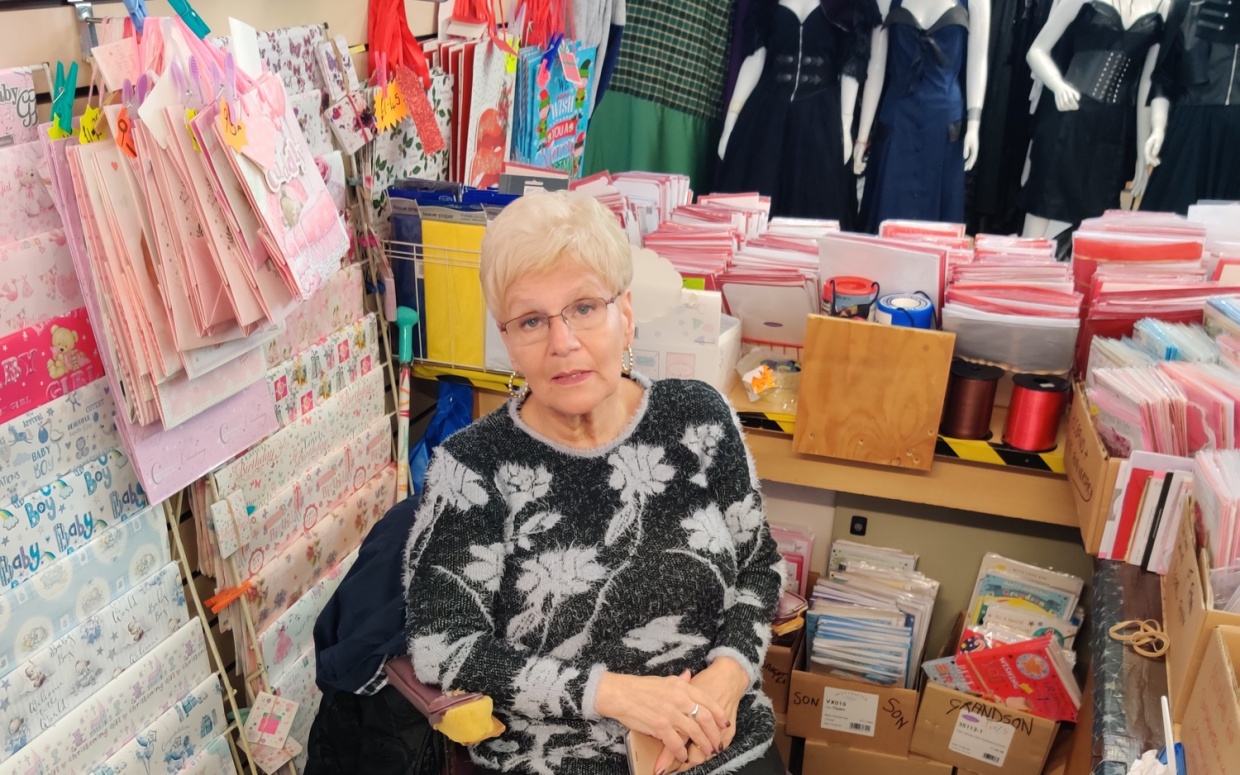 The market’s changed a lot since I was working at the JB Toy Store forty years ago. After that, I was on the flea market outside for twenty years – when that closed, me and my cards moved in here. It used to be thriving back then. The footfall has dropped a bit in recent years, but I’m still here. People think self-employment will be exciting and make you rich – that isn’t the case, but it keeps me occupied. When my husband died five years ago I thought, maybe it’s time, but I wasn’t ready to give up and stop working. I’m no businesswoman, but I like it here.

I keep a lot of regular customers, basically because the cards are so cheap – someone came here and just kept saying, “I wish I’d come here first.” Nothing goes up really, not my stuff – the wrapping paper is still 25p a sheet. It’s regulars that keep me going. When I’m in the supermarket, they look down the aisle and say, “It’s card woman.” One of my regulars is helping me behind the counter now. She sends out 340 Christmas cards a year – she has twenty-four aunties and uncles. Nobody has twenty-four aunties and uncles! I’m thinking, Where do all these people come from? She’ll be back here on Monday though, zooming around and helping out.

Some people just come for a chat, there’s a lot of old people who are lonely and just like having someone to chat to. They come through and you know they’re not wanting anything really, just, “How are you?” But I can’t remember everyone’s name. They ask “Has our Brenda been?” and I think, Which one’s Brenda? I know her by sight, but not by name. I have to make something up, “I’ve been very busy, she might have been!”

We get a lot of strange customers, we do attract strange people. The little man with his stick – I feel like hitting him with it sometimes. He lost it twelvemonth ago, and he’s still asking if I’ve seen it. And then you get these people, there’s one man in particular who likes to be independent. I’ll ask if I can help and he’s like, “I’m alright, I can find it, I’m alright, I can manage.” Twenty minutes later, yippee, he’s found it! Why didn’t you just tell me, and I can help you? You get people with all these little idiosyncrasies. There’s another guy that comes round and buys cards for the years you were born. Once a month he’ll buy half a dozen and he’ll send them to stars, Stirling Moss and people like that. There’s a lot of strange people, you get used to it.